Our final Global Test article has been published at Backpacking Light! This is something that Kristin and I first starting talking about in late 2009, and we approached the publisher in early 2010 with our pitch. They liked it, and our Global Test series began. We thought it would be two or three articles, but it turned into 4 Global Test articles, plus a dozen photo essays, 4 reports for ISPO (Outdoor Sporting Convention in Munich), and numerous product reviews. Here is the final installment as we belatedly wrap up our series (the article was lost in a staffing transition more than a year ago) :

Is this the end to our relationship with BPL? Stay tuned . . .

This is the day backpack that I used for backcountry skiing all last year. Could have been a pretty good pack, but there were some serious flaws...
CAMP X3 600 Ski Pack Review @ Backpacking Light
Posted by Danny at 11:25 1 comment: 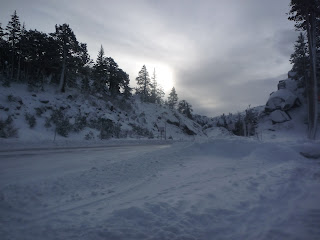 It has been a challenging winter for us backcountry skiers. We've had to be patient through the dry periods, and then chase the storms for fresh snow. The risks are higher as new snow can increase avalanche danger, as well as make the roads treacherous (of the two, the latter is really the bigger risk).

As much as we try to plan our weekends, we've also had to be flexible with our trips. Two weeks ago, we were set to ski the whole weekend, staying at our friend's house in Truckee (Thanks again Treesh!). However, the start of the storm was warm, dropping rain instead of much-needed snow. Moreover, visibility was minimal and winds were up to 100mph.

We delayed our trip for one day, hanging out at home while the rain poured down here, hoping it was turning to snow up there!


View Larger Map
Sunday morning came and we woke early. Not exactly with delight, but with a half-hearted determination. After several hours of driving, we finally parked at what we thought might be our destination: Deep Creek.

We didn't have good directions, there were no road or trail signs, and I couldn't pull up a map on my iPhone as I had no reception. However, there were two other cars parked there, and ski tracks heading up the first hill. Whether or not this was the right place, we were going anyways.


Deep Creek is located on the west side of 89, less than 5 miles south of highway 80 and Truckee. The trail starts with a few switchbacks, zigzagging up the hill. Then the trail flattens out and continues westward along the drainage, adjacent to the namesake creek. At this point, most skiers turn south and skin up the ridge, until they get to where they want to descend. We didn't know this and so continued along the creek's edge until we met some other skiers returning to their car. They were very helpful in pointing us in the right direction.

We did two big laps on the north side of the mountains. It was very, very challenging getting up the mountain, and the skiing down was difficult in it's own right.  Deep snow, steep slopes, dense tree growth, and most importantly - poor planning. The trip would have been much easier had I done more research beforehand. Too often, that is the story. Somehow my amazing wife puts up with my ineptitude! (Or is it laziness?)

Amazingly, K worked for two hours so that we could spend the night in Truckee and ski the next morning. What a trooper!

Monday morning rolled around, we had a light breakfast and drove to Pole Creek (one drainage south of Deep Creek). We skied half an hour uphill before agreeing that this was dumb. The snow had gotten warm the day before and then froze at night, so now it was crust. Backcountry skiing would be miserable. We skied back to the car, drove a few miles south, and spent the next 90 minutes skiing the mostly empty slopes of Alpine Meadows. It was fun to ski a few long runs WITHOUT having to work for it!

Next weekend we are skiing at Kirkwood resort for one day, then backcountry skiing into the Bradley Hut where we'll stay for two nights. This will probably be our last ski trip of the year. Look for the trip report and photos next week.

I've learned a few things as I've gotten into trail running and am now preparing for two ultra marathons. You can read my six tips for helping you train:

I'd be very appreciative to any one who leaves a comment for the article. Thanks!

My review has been published on the adventure race Berghaus Octans 40 pack in Backpacking Light Magazine. Read it here!

Also, I am trying to sell an amazing down jacket that I got for K, but it was tad too small. It is the Rab Infinity, womens small, still brand new. Click here to learn more.
Posted by Danny at 21:19 No comments:

Start your shopping here! Find the best prices and selection on outdoor and travel gear and clothing.